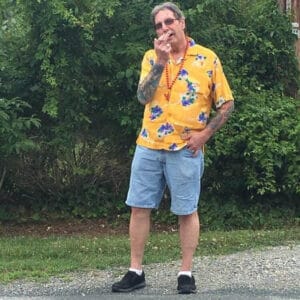 Ignatius (Nat) Rychwalski 66, of Colonial Beach, Virginia, passed away on April 16, 2021 at his home surrounded by family.

Nat was born in Baltimore, Maryland to Bertha and Ignatius Rychwalski on March 1, 1955. He is preceded in death by his parents; his siblings, Richard and Robert Rychwalski; and his son, Steven Rychwalski.

Nat is survived by his wife, Michele Rychwalski; his son and step-daughters, Daniel Rychwalski, Christina (Brian) Trest, and Rachel (Aaron) Harvey; his grandchildren, Austin Rychwalski, and Aidan and Parker Trest; and his “granddogger”, Locksley.

Nat was a kind, fun, loving, sarcastic husband, father, and grandfather with a great sense of humor. He often found joy in playfully teasing and joking with his family. His laughter and poop jokes will be greatly missed. He was known for spoiling his grandchildren, often allowing them to put anything they wanted in the shopping cart.

Nat loved his life long career as a High Voltage Electrician, often telling stories of how he enjoyed being shocked. He retired from Trigen in 2013. In a true “coincidence”, it was ironic that on the day he lost his battle with cancer we experienced an electrical outage in our town. He had one last bout of excitement much like the many electrical outages he responded to on the UMD College Park Campus for years.

Since his retirement, he loved spending time with not only his family, but also his pets. His love for animals often came above his love for people. He was generous in his donations to animal shelters and rescues. Nat was also a friend to Bill W. for over 27 years.

No funeral service will be held.

In lieu of flowers, please make a donation to your local animal shelter or rescue.