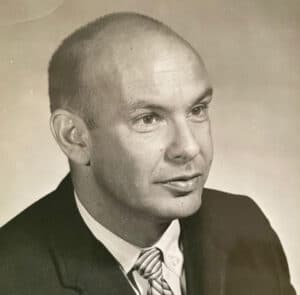 On January 18, 2021, we lost our gravelly-voiced, cigar-smoking, big-hearted football coach.  Morton J. “Chuck” Mills was born on December 1, 1928 in Chicago.  He graduated from Illinois State University in 1950 and began his coaching career as an assistant at Chicago’s Mount Carmel High School in 1951.  After the 1952 season, he entered into military service with the US Marine Corp through 1953. Returning to Football in 1954, he had several head coaching stints at high schools in Illinois and California.  He became the line coach at Pomona College in 1957 and was head coach there from 1957-1961. It was in 1961 that he received his first of many recognitions to come when he was selected as Conference Coach of the Year.

Always looking for ways to expand the horizons of his players and coaches and spread his team-building philosophy, Mills was instrumental in bringing American football to Japan.  In 1971, he took his USU football team to Japan to compete against Japanese collegiate all-star teams, marking it the first time a U. S. college team had played in Japan.  In 1974, he returned to Japan with his Wake Forest team.  He also took his 1985 SOU team to Kobe, Japan.  A year later, Kwansei Gakuin University became the first Japanese team to compete in the United States, when it played SOU in Ashland, Oregon. Four years later, Coach Mills continued with his commitment to the introduction of American football in Japan by taking his 1990 USCGA football team there to compete.

As the Japanese Times wrote on January 19, Mills is considered “one of the fathers of American football in Japan.”  Since 1974, the award given to Japan’s top college football player of the year, the Japanese version of the Heisman Trophy, is called the “Mills Cup.”   Most years, Coach Mills traveled to Japan to present the trophy himself.

“Fatherhood” is a key word when talking about Coach Mills.  He capably served as a surrogate father to many of his players and to others in need of his help.  He saw his players, coaches, staff and supporters as his extended family and he dedicated his life to keeping his football family members connected.  He formed a community of past players, coaches, staff and supporters from all the schools where he coached, which he dubbed “Brothers & Kuzins.”  His frequent emails to the Bothers & Kuzins were always signed “Luv Chuck.”

Mills was so much more than just a football coach. He was a life coach, as well. He cared for the people he came in contact with as human beings.  He wanted his players to graduate, to succeed and to flourish in life.  His goal was not just to stay connected to his players, but to provide them with platforms where they could form lasting friendships and remain connected to each other.

A Chuck Mills football practice was always efficient and well-organized; there was no wasted time.  And, that’s how he lived his life—always on the move, always thinking of ways to keep his family of Brothers & Kuzins together.

Coach Mills spent much of his time staying connected to others during his retirement years in Hawaii. Hawaii is where he chose to settle, as it’s warm there year-round and he felt it was a good “middle base” for traveling between Japan and the mainland.

Upon his relocation to Hawaii in 2000, he immediately became a consultant to the Football program at the Marine Corps Base there. He continued to immerse himself in football, sharing his knowledge, insights, and wisdom through speaking engagements at high schools and colleges around the Islands. He was appointed to the Pro Bowl committee via the Hawaii Tourism Authority in 2012 as well as being selected to help with the NFL Hawaii Combine Camp. He was also involved with the development of a Pacific Rim Football League and consulted with the Hawaiian Arena Football League.

Although Coach kept very busy with football, he wasn’t too busy to start his day with morning coffee. It was there that he formed new friendships with a spirited and eclectic group he called “the coffee crew.”  They would listen with bated breath as he regaled them with his football stories. His recall of details was uncanny. He would talk about a play that happened in the 3rd quarter of a game (from 1972), with only 2.5 minutes to go, etc, etc – and he would often follow up with more details about players in the game and what they were doing today, their profession, how many kids and grandkids they had, etc. He had full knowledge and loving memories of hundreds of his “kids.”  As he told his stories, tears would often come to his eyes.

The coffee crew quickly grew to love him deeply.  During the last 20 years, barely a morning coffee was missed. They honored and respected him, watched out for him as age began to slow him down and always listened to his stories, no matter how many times they had been told. Coach remained a force to be reckoned with until the final end.  Oh, but how, he made everyone smile and laugh.

Coach Mills will be missed immensely, but the impact of his legacy will live on through the hundreds of friendships he forged and through the “Luv” he shared and fostered.

Donations to honor Coach Chuck Mills can be made directly to your college, academy or university. Here are direct links to some of them: