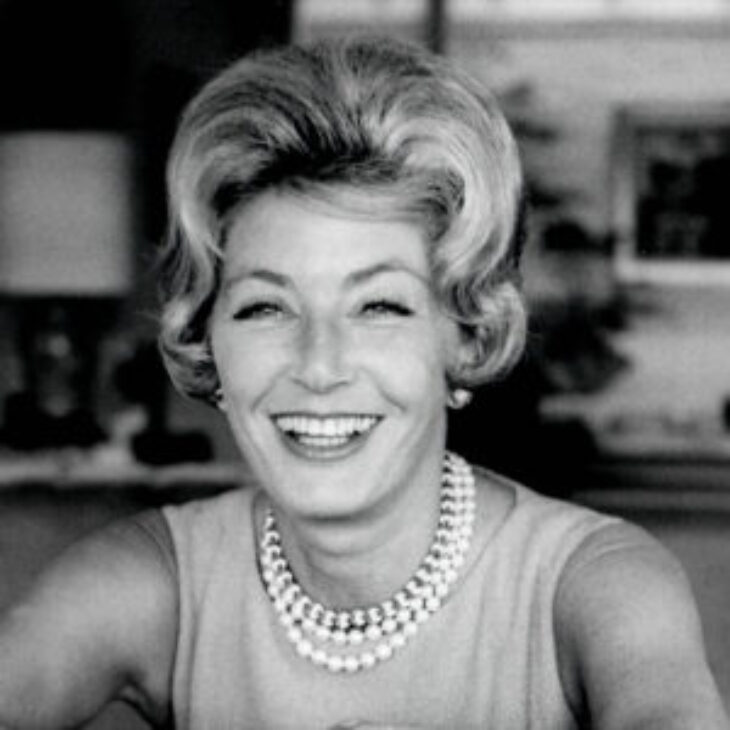 It is with great sadness that the Douglas family announces the passing of their matriarch, Anne Douglas, peacefully at home in Beverly Hills at age 102.

As half of a couple considered Hollywood royalty, Anne Buydens first met the movie star in 1953 when he offered her a job as his publicist while in Paris to film  “Act of Love.” She said no in flawless English. She also refused his phoned invitation to dinner a few hours later, opting for scrambled eggs at home instead. Unused to turndowns by women, but really needing her skills, he campaigned to change her mind–at least about the short-term job. And so  began a working arrangement that turned into mutual respect and love, in part fostered by her wicked sense of humor and his ability to appreciate it.

When “Act of Love” wrapped, Buydens was off to the 6th  Cannes International Film Festival for the first of her three-year contract to handle protocol and publicity. Douglas followed her there, studying the script for his next film, “Ulysses,” on the beach. Anne had already been hired to be its unit publicist, so their romance would continue in Italy.

It survived–primarily by correspondence–after Douglas started filming  “20,000 Leagues Under the Sea,” on locations in the Caribbean  and then at the Disney Studio. With an ocean between them, Kirk urged her to come to Beverly Hills as soon as she finished working with the Cannes Film Festival of 1954. She arrived in Los Angeles on April 24th. Six weeks later, seeing her pack to return to Paris, he proposed.

The couple flew to Las Vegas on Saturday afternoon, May 29th, 1954, after Kirk left the studio. It wasn’t romantic, but it was legal and her new husband vowed that someday he would marry her again in a big celebration.  He kept that promise for  their 50th anniversary on May 29, 2004.  They were married for 66 years and had two sons together, Peter and Eric, who joined Michael and Joel from Kirk’s marriage to Diana Dill (whom Anne called “our ex-wife”) as one united family.

The future Anne Douglas was born Hannelore Marx in Hannover, Germany. Her father owned  a textile factory and multiple retail shops; her mother was a socialite. After their divorce, Anne stayed with her father who fostered her interest in his business operations before sending her to boarding school in Switzerland. Unwilling to return to Hitler’s Germany, she went to Belgium to continue her studies, which were interrupted when the Nazis bombed Brussels in 1940.

Anne escaped by car with some friends, heading for freedom and France. But traveling with German papers was a liability to them all. For safety’s sake, the friends decided she should marry Albert Buydens to become a Belgian national. She was now Anne Laure Buydens, but the safety was short-lived. The Germans occupied Paris just months after their arrival.

When the conquerors decreed that movies could no longer be shown without German subtitles, Anne’s fluency in German, English, French and Italian enabled her to find work with a French film distributor. The money she earned helped Anne and her friends survive the four year of occupation before Paris was liberated in 1944.

After the war, her company was commissioned to create a weekly series called “Paris Cavalcade of Fashion” for the NBC Television Network in America. With her innate sense of style and connections with the couture houses, Anne was asked to produce it for a successful run of more than two years.

By then, international film production was booming in Paris. John Huston sought out Anne Buydens to work with him directly as his assistant and location manager for “Moulin Rouge.” For the Hollywood premiere, Huston asked her to coordinate the publicity. On the sea voyage back to France, Anne saw her first Kirk Douglas movie, “The Big Trees,” not knowing that within weeks she would meet its star. A decade after the Americans freed Paris, Anne Buydens nee Hannelore Marx, married her American, changing countries–and names–for the last time.

The newly minted U.S. citizen took great pride in her adopted homeland.  By her husband’s side, Anne Douglas became a goodwill ambassador for American values; she was honored by the State Department’s United States Information Agency with its Director’s Award for increasing international understanding. It was at President Kennedy’s request that the  couple first undertook the mission which they insisted would be at their own expense. Twenty years and 44 countries later, the Douglases decided to concentrate on civic and community causes closer to home.

As Dorothy Chandler’s “lieutenant” in the campaign to build the Los Angeles County Music Center, Anne Douglas convinced moguls and movie stars–including her husband–to double and triple their initial contributions to the cause. After it opened, she dedicated herself to its success. She served on the boards of The Mark Taper Forum and the Center Theater Group for many decades and arranged the Douglas Foundation’s large gift to build the CTG’s Kirk Douglas Theater in Culver City.

She was one of five original founders of the Cedars-Sinai Research for Women’s Cancers, a natural progression from her 38 years of active membership in the Women’s Guild of Cedars-Sinai Medical Center and her own recovery from breast cancer.

When Anne Douglas read about unsafe school playgrounds in Los Angeles School District schools in The Los Angeles Times, she was determined to fix them all. She convinced her husband the only way to fund the massive endeavor was to auction most of their art collection at Christie’s. By 2008, ten years after the Kirk and Anne Douglas Playground Award program began, 403 schools had refurbished play spaces. Anne and Kirk Douglas attended every dedication. Kirk said, “She did all the work, and I got to come along and play with the kids.”

The Anne Douglas Center for Women at the Los Angeles Mission began with a tour of the facilities to provide shelter for the homeless of Skid Row. “But where do the women sleep?” she asked. Appalled to learn there were just a few beds for them, separated from the men by a hanging bedsheet, a new project for The Douglas Foundation was born.  For nearly 30 years, the Center has been providing rehabilitation and new life skills for hundreds of women. Every year, its founder celebrated her birthday by having lunch at the Mission with her “girls.”

To date, The Douglas Foundation has contributed more than $118 million to worthy causes. In 2012, The Foundation announced additional gifts of $50 million to five nonprofits, including the Kirk Douglas Theater, the Anne Douglas Center, The Motion Picture and Television Home’s Alzheimers and dementia unit, Sinai Temple’s Kirk and Anne Douglas Childhood Center, and St. Lawrence University’s Kirk Douglas full scholarships for minority students. It will continue its good works under Anne Douglas’s appointed administrators.

Over the years, Anne Douglas received countless recognitions of appreciation. One of the most meaningful was the Jefferson Award for Greatest Public Service of a Private Citizen, which she received  at the Kennedy Center in Washington in 2003. But perhaps her greatest recognition came from her husband when he said:

“ I often wonder what would have happened to me if I hadn’t married Anne. I might not have survived without her business acumen and her finely-honed instincts. She saved me from financial ruin when she persisted in her distrust of my long-time lawyer and surrogate father, who indeed stole the fortune he told me I had. She saved my life when she refused to let me fly to New York on Mike Todd’s plane which crashed, killing everyone aboard. She gave me tough love when I had my stroke and thought I would never speak or work again. Anne is selfless, compassionate and loyal to a fault. She also has a wicked sense of humor and can make me laugh in English, French and German.”

Anne Douglas is survived by children Peter, Michael and Joel; daughters-in-law Catherine and Lisa; seven grandchildren: Cameron, Dylan, Carys, Kelsey, Tyler, Jason and Ryan; two great-grandchildren Lua Izzy and Ryder, parented by Cameron Douglas and Viviane Thibes; and a sister, Merle Werbke of Berlin, Germany. Anne was predeceased by her son Eric in 2004 and her husband Kirk in 2020.

Donations in her memory may be made to the Anne Douglas Center at the Los Angeles Mission, 141 El Camino Drive, Suite 209, Beverly Hills, CA  90212.