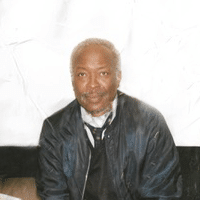 Moses Eugene Harmon, aka Gene, 77, of Laurelton Queens, passed away in his sleep on December 26, 2020 after a lengthy illness.

He was born to Myrtle and Moses Harmon on March 10, 1943 in Harlem. His parents, older sister, Carolyn, and Gene later moved to Ozone Park in Queens, NY, where he attended John Adams High School. After graduation, Gene then found himself half-way across the country attending Central State University in Wilberforce, Ohio. How he ended up there, we don’t know. But his future wife, Mildred, found herself at the same school.

Two years later the draft was happening, and Gene opted to take his future into his own hands by joining the Air Force. He served as an Airman 1st class, Teleswitch Equipment Specialist, working on missile silos until being honorably discharged in 1968. During those years he married his wife. Just like the decision to study at a college in the middle of the country, they thought getting married in North Dakota where he was stationed was a good idea too.

They later resettled in Queens, NY where Gene became a bus driver for Green Bus Lines (which later became part of the MTA). He worked long hours and made it to retirement in 2008.

Post retirement, Gene took plenty of time to do his favorite things. Watching television was at the top of the list. This can be proven by the multiple cable antennas still attached to his roof. Catching every Buffalo Bills and New York Yankees game were always a priority. Much like his parents, Gene had a green thumb and enjoyed making his front and back yards beautiful. He planted canna lilies and begonias annually and loved admiring the grapevine in the back yard when it started to bear fruit. He made time to travel too, visiting the Caribbean, Africa, China, Ireland, Scandinavia and Russia.

Gene is survived by his wife, Mildred, his children, Michelle and Myron and grandchildren Maiya and Eden Rose and members of his extended family.

The virtual celebration of life service will be held on Saturday, January 16th at 11 am EST. Pastor Jenkins of Epiphany Lutheran church will officiate. All are welcome to attend and to share joyful memories about Gene.